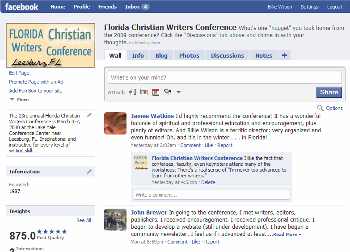 You could say we've gone bonkers over social media.

Because we want you get pumped up for the 2010 FCWC via the social media channel that appeals to you most.

If Facebook is your social hub, you can engage in conversation with conferees and faculty, browse the blogs of many Christian writers, ask questions about the conference, and do all the other stuff people normally do on Facebook.

We've also joined Facebook's NetworkedBlogs; if you prefer to read our blog from your Facebook account, here's what to do:
If Twitter is more your style, you'll find links to our blog posts, quick conference updates, and other entertaining tidbits from the writing world.

If you'd rather stick to reading our blog posts, you can get the latest posts delivered to your Inbox, or read them from your favorite RSS feed reader (see the top of the righthand sidebar to get set up). Or just come right here to the site.

Florida Christian Writers Conference on Facebook
Posted by Kindred Heart Writers at 9:00 AM No comments:

The Value of a Writing Critique Partner

A magazine editor called me out of the blue (I love it when they do that!) and assigned me a docu-drama.

Befuddled, I asked, “Uh…what’s a docu-drama?”

She explained that it is a dramatic, first-person, as-told-to story – similar to those “drama in real life” features in Reader’s Digest. “It’s written like fiction, with scenes and dialogue.”

Uh oh. I’m not a fiction writer, but the assignment sounded fun and challenging, so I agreed to tackle it. 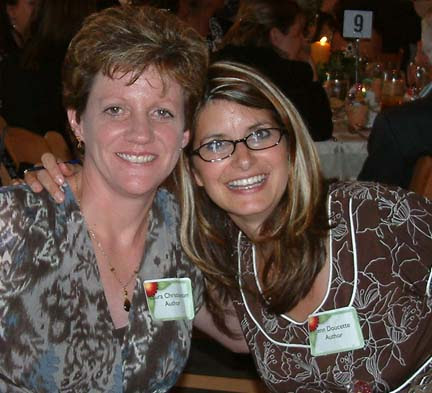 It was time to call in the rescue squad. I dashed off an email to my writer friend, Jenn Doucette, asking her to highlight places in the article I could condense and to suggest a headline (I’m headline-challenged; Jenn cranks out perfect headlines like nobody’s business).

A couple of hours later, I received her reply: “I’m on it, girlie.”

An hour after that, she returned my marked-up draft, accompanied by the terse message, “The story seemed way too choppy and disjointed.”

But I appreciate Jenn’s blunt honesty, because it’s exactly what I needed to hear. I knew, in my heart of hearts, that the story was… er… choppy and disjointed. I just needed another writer to confirm it.

During the last five years, I’ve been a member of a writers’ critique group, joined my local writers’ association, and had several writer friends (such as Jenn) who I can call on in emergencies.

These sorts of relationships are invaluable for us writers, for several reasons:

But constructive criticism is most often just what we need. I sent my draft to Jenn because we have developed such a deep trust over the years that I knew she’d tell me exactly what I needed to hear, without sugar coating it. And I knew she’d get back to me quickly.

I wasn’t disappointed. While I disagreed with some of the changes she suggested and didn’t incorporate those edits into my next draft, the vast majority of her suggestions were right on target and had me smacking my head, saying, “Duh! Why didn’t I think of that?!”

Jenn (who is a fiction writer) pointed out gaps in the story’s timeline, places where I’d made choppy transitions, and stilted dialogue (among other things). After her honest critique, I felt much more confident tackling the next revision. All it took was a second pair of eyes.

Do you have a critique partner/group? Tell us about one thing your critique partner has said that has helped you improve your writing.
Posted by Kindred Heart Writers at 9:00 AM 5 comments: 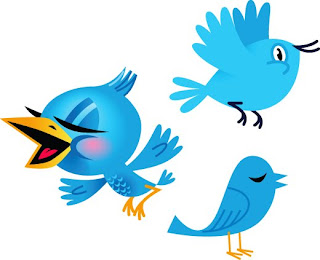 http://twitter.com/flwritersconf
If you’re not familiar with Twitter, it is a micro-blogging service in which you get 140 characters (that’s characters, not words) for each update (updates are called tweets).

Twitter is one of the fastest-growing social networks, due to its ease of use and giant chat room feel. You can search for and follow users who share your interests, sound interesting, or are from your geographic region.

Of course, you can follow our Twitter stream right here on our blog, too (check out the sidebar to the right).

Yesterday on my business blog, I posted an article called, “Why Every Writer Needs to be on Twitter.” If you’re ready to join Twitter and want some tips for how to craft your Twitter profile, consider reading that post.

Are you a tweeter? If so, introduce yourself in the comments area and provide a link to your Twitter account so we can find each other.

One more thing: If you re-tweet one of our Twitter updates or talk about the conference in your tweets, please include the hashtag #FCWC. That way, everyone who tweets about the conference can easily search for and find information.
Posted by Kindred Heart Writers at 2:49 PM No comments: